In one of the worst quotes in American history (followed closely by every popular quote from a Marvel character), Ralph Waldo Emerson said:

Build a better mousetrap, and the world will beat a path to your door. 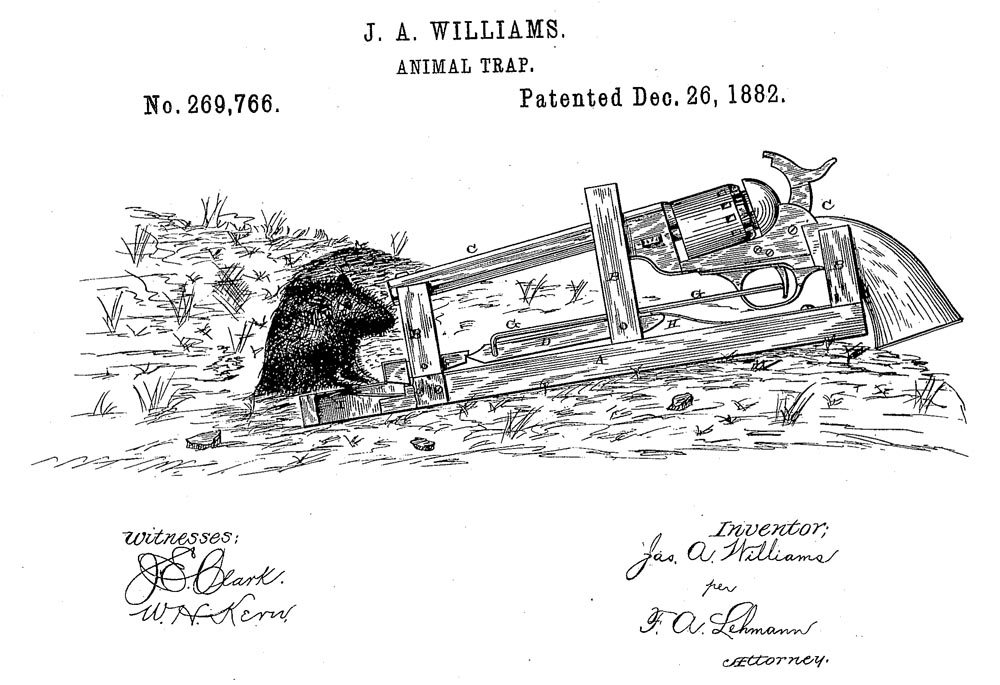 The Myth of the Better Mousetrap

I’ve got nothing against Uncle Ralph but this quote has been disproven over and over again. Nowhere has it been more disproven than in the actual mousetrap industry.

Since the first mousetrap was patented by William C. Hooker, there have been over 4400 patents issued for mousetraps. Every year there are about 400 patent applications submitted and around 40 approved.

But, when you have a mouse problem, what trap do you turn to? You get the original, tried and true Hooker mousetrap.

Out of the 4400 patents issued for different mouse traps there hasn’t been a better mousetrap? Of course there has been! The problem is just because you built a “disruptive product” that does not mean that it will immediately be adopted even if it is obviously better.

The real issue is not just being “better” - it’s showing a competitive advantage to your customers. You have to persuade the right customers for the stage you are in to adopt it. Many “better” products are either never adopted.

The Technology Adoption Life Cycle (known as TALC) is a model that explains what type of customers will adopt your product and when.

What is the Technology Adoption Life Cycle

The TALC concept originates with Everett Rogers’ research on the diffusion of innovation around hybrid corn seeds. The concept has been popularized most famously in the tech world by Geoffrey Moore in his book Crossing the Chasm.

The people who adopt your software or innovation and when they are ready to adopt it are explained in a model called the Technology Adoption Life Cycle.

Technology Adoption Life Cycle (or TALC) is a sociological model to describe the adoption of a new product or innovation over its lifetime. The adoption rate depends on different characteristics and demographics.

The 5 Stages of Technology Adoption (TALC)

The first group of people to adopt your technology are called the Innovators. The second group is referred to as the Early Adopters. Next, comes the Early and Late Majority. The last to adopt a new innovation is called the Laggards. Each group has different wants and ideas about your product and has to be sold to in a different way. 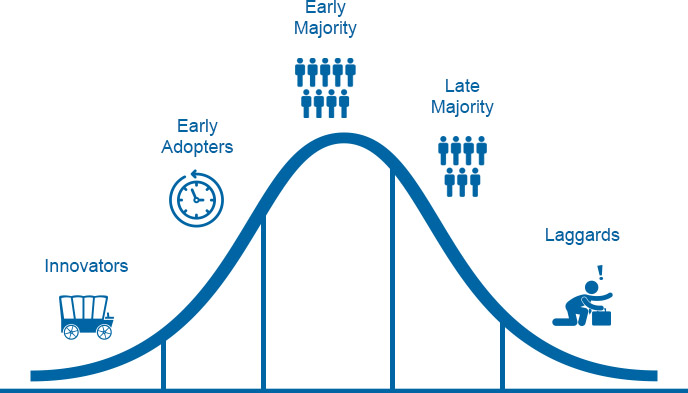 This curve represents the technology adoption life cycle. The adoption over time is drawn as a normal distribution. Your innovators make up 2.5% of the market share. The early adopters are around 13.5%. Early and Late Majorities are 34% each and the Laggards are the last 16%.

Who are the Innovators

Your first customers will have very different expectations than those who buy it later. These are called the Innovators.

Innovators don’t buy a product because of case studies, proven results, or an established track record. They will buy it because it is new and innovative. They inherently believe that new innovation is better than old innovation. Instead of being wary about no social proof, they are actually motivated by it.

They are the geeks. They dance from product to product. They are willing to take the risk in order to be first.

I can’t wait to get my Google Glasses so I can leave a negative review for you on Yelp while we are talking.

The Innovators make up about 2.5% of your total potential customers.

Focus on the bare minimum viable product for your innovators. Build your MVP based on current customer data, assumptions, and even intelligent guesses. They won’t mind bugs. In fact, they will expect them.

Launch quickly. This lets you collect the largest amount of validated learning about customers with the least effort. Start small, prove your concept, and expand. Keep your customers’ enthusiasm going by not making promises you can’t keep.

If successful, this MVP can help fund future development.

Who are the Early Adopters

Early Adopters are looking for a competitive advantage. By adapting early, they hope to get an edge over their competitors. They know that being early likely means that there will be small glitches and problems. The Early Adopters are willing to accept the risk for the perceived reward of acting early.

The Early Adopters find it easy to appreciate the benefits of new technology. They are more risk-averse compared to Innovators and tend to make more reasoned decisions about a product. They are ready to jump in early but, they need more information than an Innovator in the decision-making process.

The Early Adopters make up about 13.5% of your total potential customers.

Who is the Early Majority

The Early Majority is more conservative in their purchasing but are open to new ideas. They will adopt your innovation but after a determined amount of time.

The Early Majority represents the largest market. It is tempting to target them early in the process with your MVP. This is a mistake. They are difficult to win over and will not tolerate a buggy product. They want to see it survive in the wild first.

Refine your MVP with the Innovators and Early Adopters first. Then once you are stable, approach them with a more mature (read: less buggy) product.

I read all 268 Amazon reviews before buying shoelaces

The Early Majority makes up about 34% of your total potential customers.

Who is the Late Majority

The Late Majority adopts an innovation well after the average customer in your market. They approach everything with a massive degree of skepticism. They will wait until after most of your market has accepted it – at this point, it’s not really innovative. The Late Majority doesn’t look for innovation - they look for a better status quo.

Late Majority are skeptical about innovation and usually have constrained budgets. You need a better value proposition to catch both the Early and Late Majority. The more complex your innovation is the longer it will take to convince them. Needless to say, once they adopt your product, they expect it to be polished.

The Late Majority makes up about 13.5% of your total potential customers.

Who are the Laggards

Laggards are the last to adopt a new innovation. They are averse to change and usually have a very tight budget.

They will accept an innovation when they are forced to. Even then, they will hate you for being alive.

Get off my lawn!

The Laggards make up about 16% of your total potential customers.

The Technology Adoption Life Cycle can be further grouped into two main groups; The Innovators and Early Adopters and the rest of them. 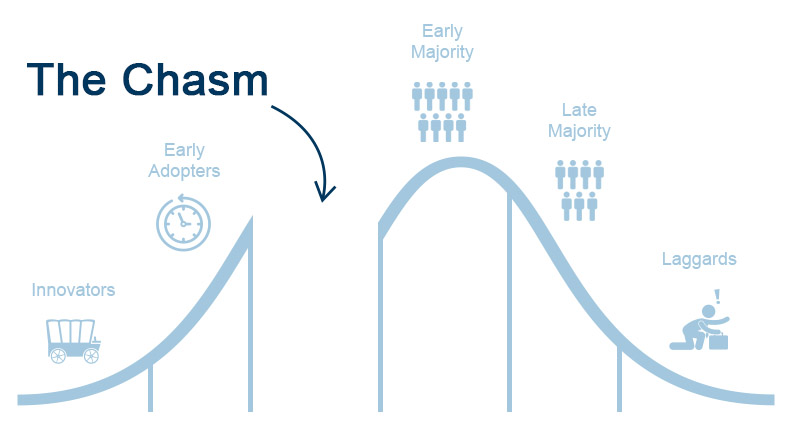 Those that are on the left side of this divide are the people that get in early on a product. They either like new products (the Innovators) or your product is solving a big pain point for them. These early customers are happy to be in early and expect there to be some bugs. They are more patient when things aren’t perfect.

Everyone after Innovators and Early Adopters needs a more complete and reliable solution. This is the Chasm described by Geoffrey Moore in his book, Crossing the Chasm.

This creates two different customer bases; the Early Market (Innovators and Early Adopters) and the Mainstream Market (everyone else). These customer groups are very different.

As your product progresses there will be a time early on when you get excited. You look at the numbers and think, “this thing is starting to take off.” You and your co-founders start looking at the bios of the VC people you follow on Twitter to see “which would be the best culture fit.”

Then…you hit a sales plateau. Growth stops. What happened? Growth was about to hockey stick??

According to Geoffrey Moore, to cross The Chasm you must have a few things in place.

First, you need a “whole product”. An MVP will not get you across. Don’t even think about selling to the Early Majority until all your major bugs are fixed. You don’t need to have complete functionality and no major bugs. It doesn’t have to be perfect but it must deliver on every functionality that you have promised.

Once you have a more polished product, you need to position your product differently. The Early Majority will not buy the dream of what could be. You need data, case studies, and a compelling/concrete reason to buy your product. Show them all the reasons why your product and your support team are the right choice.

Now you need to look at your pricing. Now is not the time to price based on value. To entice the Early Majority your pricing needs to be competitive.

Even with you having a competitive price, you need to distribute your product through the right channel. You have to decide what is the best channel to target the Early Majority. Refine your pitch to fit their needs in that channel.

Your sole focus as a business is to cross that chasm.

Time to break out the sticky notes

So how do we take action on this information? You need to realize where you are in the cycle. Then brainstorm on what each group of adopters wants/expects from your product.

Building the “right” feature at the wrong time will slow down your progress and cost you money.

The best way we have found is to get the product and engineering teams in a room together with a whiteboard. Draw the TALC curve on the board and start brainstorming. Write down all the features ideas based on customer/market knowledge on sticky notes.

Discuss where you think each feature needs to be and place the sticky note in that adoption group. The features needed for the Early Majority aren’t always needed by the innovators and early adopters.

This will help you better define a lean MVP and reduce your time to market. The goal is to get your product into the wild so you can test it with actual users. Getting the product in the hands of your innovators and early adopters will also get some revenue coming in.

Once you have your MVP, reevaluate the sticky notes you have for the early majority. Add any new features and take away irrelevant ones based on what you have learned from early customers. Change your focus and build the features you need for the next phase of customers. Also think about how you need to change your sales pitch.

Educate the team on what this customer needs are. The attitude and habits of the entire team need to shift to meet the needs of your customer group.

Knowing what stage you are in the technology adoption life cycle is very important. This is your guide to what features to work on and will also help you tailor your sales pitch for the right market. You can’t push a product through the cycle prematurely.

It’s not about building a better mousetrap. It is about knowing what group you are building it for and focusing on their specific needs. Once you have learned to sell to this customer group you can move ahead in the cycle and tailor your product and pitch to the next group.

Next: 1-10-100 rule in quality software development