SaaS Principles Part 1 - The Conflict between Licensed Software and SaaS 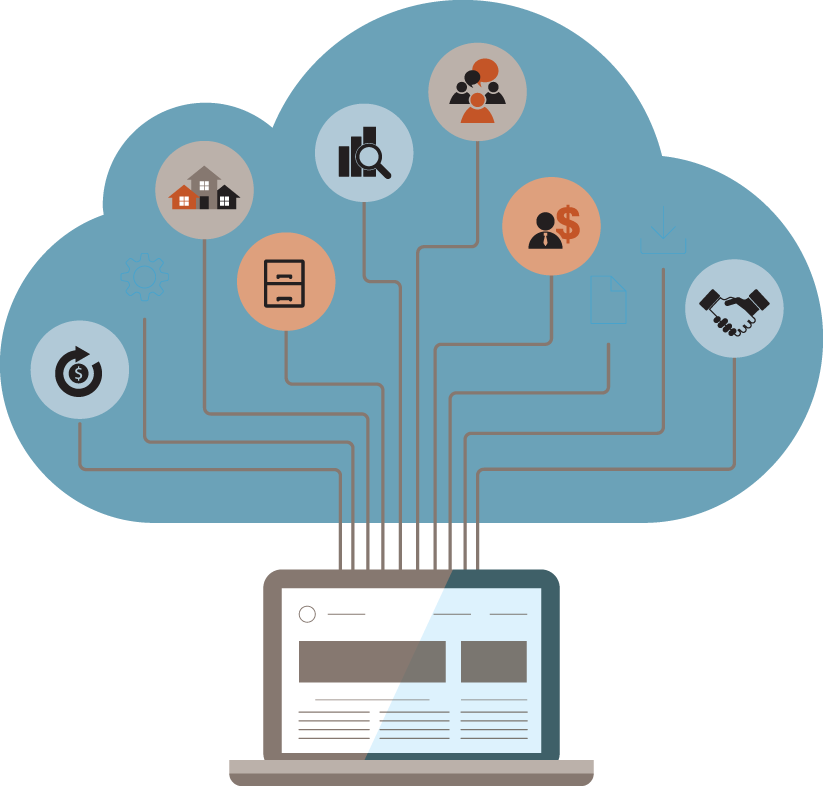 Attempting to migrate on-premises, licensed products to a recurring revenue SaaS (XaaS) solution is perhaps one of the most difficult things a company can do.  As Dave Swenson writes in SaaS Migration Challenges, changes are often necessary to the fabric of the company, including the company culture and mindset.

In many cases, the principles that make a company successful in the on-premises, packaged software model are insurmountable barriers to success in XaaS.  As an example of the difficulty of this transition, consider one group of opposing principles endemic to SaaS transition:  building to customer want (licensed model) versus building to market need (SaaS model).  For years, on-premises providers were successful by filling their product backlog with customer requests (or “wants”).  When requests were specific to a single customer and didn’t appear to be extensible to a broader base, a revenue stream associated with professional services was created.  Professional services, or a system integrator, would make modifications to source code creating a unique “version” for that customer.  This approach led to bloated products, oftentimes with a single customer using less than 30% of a product’s capabilities.  Moreover, release “skew” developed, increasing the cost of maintenance of multiple releases in “the wild”.

Contrast this with a product approach that attempts to “discover” the intersection of true market need.  Product backlogs are built primarily on thorough market analysis coupled with experimentation.  Customer asks (or “wants”) help inform prioritization, but are not the primary driver of product backlog.  Sales organizations focus on selling the existing product rather than driving it, and the role of professional product managers emerge.  This notion of “want” vs. “need” is critical to the success of a company’s transformation.

The difficulty of such a journey from “want” in the licensed product world to “need” in the XaaS world should be clear to everyone.  If the difficulty is high in a transition, imagine the stressful forces a company must endure to live in both worlds for an extended period of time.  Sales organizations that build upon selling a customer “whatever they desire” often revolt at being relegated to selling only what exists.  Product management organizations that previously acted like “business analysts” taking requirements, now need to perform real market analysis, understand discovery and experimentation and get “closer to the market”.  How does one build a company that can be successful in both worlds at once?  Difficult indeed given the chasm between one approach and the other.

The figures below indicate a handful of the most common opposing forces as examples of how companies need to “reinvent themselves” and think differently to be successful as a XaaS provider. 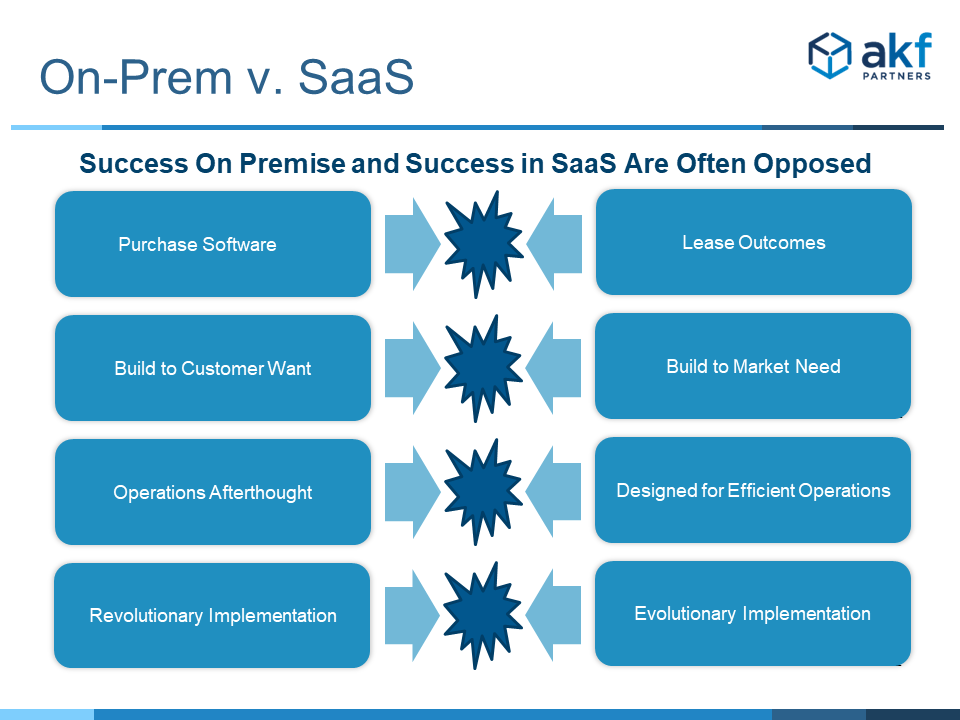 At the root of many of the differences between Licensed/On-Premises products (or licensed products that are hosted in ASP-like models) and true XaaS products is the notion of what the customer expects with the sales transaction.  In the licensed model, customers want outcomes but understand they are purchasing software.  The customer understands that much of the risk of running the software including the “ilities” like availability and scalability are borne by the customer.

In the SaaS world, the customer mindset is that of leasing outcomes.  Comparatively low switching costs (compared to on-premises) allows the customer to more easily move should they not achieve their desired outcomes.  As such, service providers must move closer to the customer and better understand, in real time, customer expectations and the product’s performance to those expectations.

To highlight this difference, consider the difference between renting a home and owning a home.  In most markets, the total cost of rent against the combination of amortized home values over an equivalent period and the residual (resale value) of the home indicates that renting is more expensive.  But a majority of the risk of renting exists with the leasor including home maintenance, risk associated with loss to catastrophe, etc.  The same is true with SaaS compared to owning a product:  SaaS requires the service provider to take on significantly greater risk compared to selling a product to a customer.

Henry Ford perhaps said it best when he said, “If I’d asked customers what they want, they would have told me a faster horse.”  Steve Jobs agreed with Ford, indicating that people don’t know what they want until you show it to them.  Here Steve is referring to true “need” vs. a stated customer “want”.  Licensed products often start with customer wants.  Sales teams garner desires, and either force them into product backlogs or sell modifications through professional services.  Because the customer purchases the software, the company isn’t as incented as the SaaS model to ensure that the customer gets value from that which they purchased.  The product development lifecycle, regardless of how it is represented to the customer, is almost always in fact waterfall.

XaaS companies attempt to “find” (aka discover) market need.  Product managers analyze markets, establish goals, create hypotheses to achieve these goals, and co-create solutions to test these hypotheses with their engineering teams.  What a customer may indicate as a “want” may help inform prioritization of the backlog especially if there is an intersection in customer desired outcomes.

In the on-premises world, the customer is responsible for the cost of operations and the effective and efficient operations of any solution.  Considerations such as monitoring for early fault and incident detection are at best after thoughts in the world of on-premises software development, giving rise to an industry specializing in after market monitoring.  The reasoning behind this approach is clear – time spent producing efficient solutions that can be easily maintained takes away from new feature development and new revenue associated with those features.

In the SaaS world, we are responsible for our own cost of operations and therefore building products that operate efficiently with low cost of goods sold is important to achieving high gross margins and profit margins.  Furthermore, as we are responsible for all the “ilities” (described below), we must design our solutions to be monitored in real time to detect errors, faults, problems and incidents.

Put simply, on-premises models rely on “fork-lift” major product upgrades that often take significant effort, downtime and customer expense to implement.  The latter is often seen as a bonus to the provider of software, as upgrades can become an additional revenue stream for professional services both in assisting with the upgrade and re-implementing customizations lost during the upgrade.

XaaS products simply can’t afford the downtime, or cost associated with revolutionary implementations.  As such data models and functionality evolve quickly but iteratively with the capability to completely roll back or “undo” both schema modifications and functionality additions. 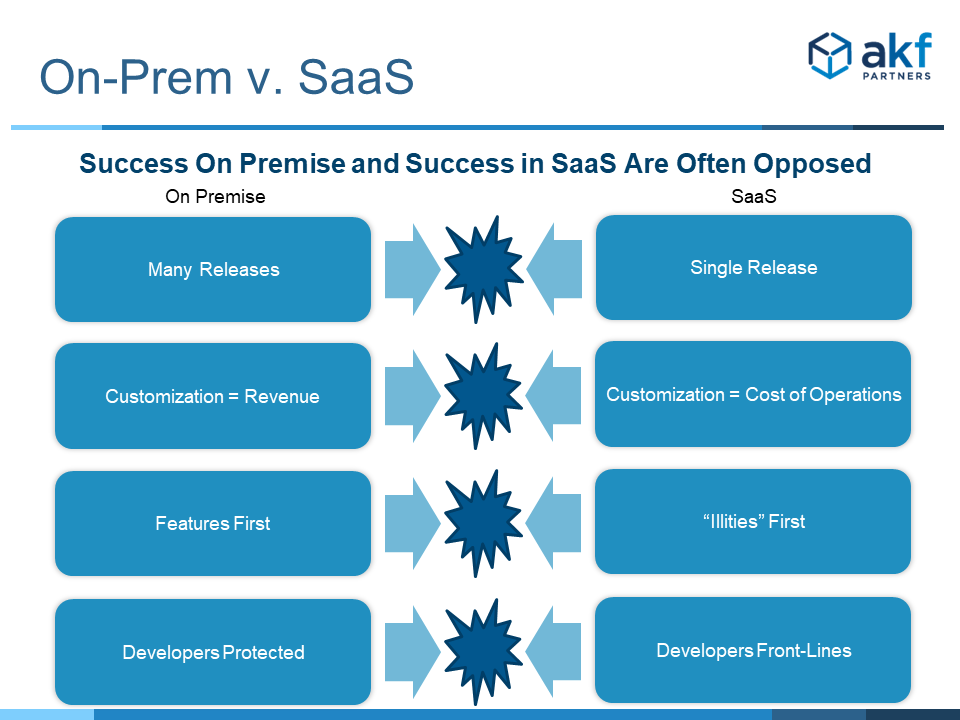 Many Releases versus Single Release

Because on-premises companies can rarely force patch or release adoption across their installed base (they typically have no access to these environments), the number of releases they support may be in the 100s or even 1000s.  This release skew increases operating expenses as a large portion of engineering may be spent supporting problems across a very large number of releases.

SaaS companies recognize that release skew increases the cost of development, and as such, force most customers into a single (or no more than 3) releases.  Companies that fail in this principle face on-premises-like operating margins as engineering budgets increase to support releases.

On-premises companies see customization as a valuable revenue stream, often at the expense of increased engineering budgets to support the maintenance of these customizations and the distractions they cause.

While all of the XaaS principles are important, one of the most difficult to grasp for our on-premises clients is the notion that the “-ilities” (sometimes called NFRs or Non Functional Requirements in waterfall development) like availability, scalability, reliability, etc are now the most important feature within their products.  It pains me to even call them a feature, as they are the “table stakes” (the ante, the price we pay) for the game in which we participate.

These “-ilities” steal time from engineering teams – and appropriately so – to ensure the quality of the service provided.  Feature production is still important – it’s just second in line behind ensuring that the solution is available for value creation.

Because feature production is highly correlated with revenue in the licensed software model, companies often protect developer time with multiple layers of support.  When customers have outages, companies attempt to resolve them with lower cost support personnel before stealing development time from critical projects.  Licensed product companies can get away with this because when there is a failure at a customer site a comparatively small portion of revenue and customer base is at risk.

In the XaaS model, multiple customers are likely impacted with any outage due to increased tenancy.  And because we believe that availability is one of the most important features, we must respond with the resources necessary to resolve an incident as quickly as possible.

This is yet another sticking point with companies making the SaaS transition:  sometimes significant portions of engineering organizations do not want to be on call.  Those people simply have no role in a utility company-like model where “dial tone” is essential.

Part 2 describes a set SaaS principles derived from the conflict inherent to a migration from licensed products to the XaaS model.

The move from on-premises, licensed software revenue models to XaaS models is difficult.  Many of the principles that make an on-premises company successful are diametrically opposed to success in SaaS.  The longer a company must operate in both models, the more likely the culture, mindset and fabric of the company will be stretched.  Many successful companies decide to operate the two businesses separately, to ensure that one culture is not influenced negatively by the other.

AKF Partners has aided a number of companies in their journey from on-premises to SaaS.  Read more about our SaaS migration services.

Next: Separation of Duties in an Agile Environment