What's the difference between VMs & Containers?

Inefficiency and down time have traditionally kept CTO’s and IT decision makers up at night.  Now, new challenges are emerging driven by infrastructure inflexibility and vendor lock-in, limiting Technology more than ever and making strategic decisions more complex than ever.  Both VMs and containers can help get the most out of available hardware and software resources while easing the risk of vendor lock-in limitation.

Containers are the new kids on the block, but VMs have been, and continue to be, tremendously popular in data centers of all sizes.  Having said that, the first lesson to learn, is containers are not virtual machines.  When I was first introduced to containers, I thought of them as light weight or trimmed down virtual instances.  This comparison made sense since most advertising material leaned on the concepts that containers use less memory and start much faster than virtual machines – basically marketing themselves as VMs.  Everywhere I looked, Docker was comparing themselves to VMs.  No wonder I was a bit confused when I started to dig into the benefits and differences between the two.

As containers evolved, they are bringing forth abstraction capabilities that are now being broadly applied to make enterprise IT more flexible. Thanks to the rise of Docker containers it’s now possible to more easily move workloads between different versions of Linux as well as orchestrate containers to create microservices.  Much like containers, a microservice is not a new idea either. The concept harkens back to service-oriented architectures (SOA). What is different is that microservices based on containers are more granular and simpler to manage. More on this topic in a blog post for another day!
If you’re looking for the best solution for running your own services in the cloud, you need to understand these virtualization technologies, how they compare to each other, and what are the best uses for each. Here’s our quick read.

One way to think of containers vs. VMs is that while VMs run several different operating systems on one server, container technology offers the opportunity to virtualize the operating system itself. 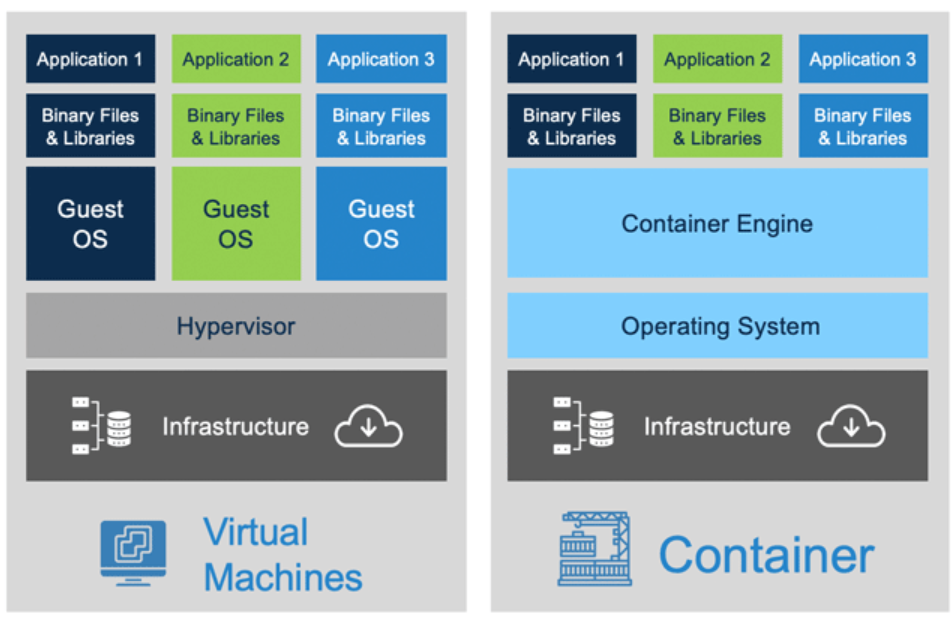 VMs help reduce expenses. Instead of running an application on a single server, a virtual machine enables utilizing one physical resource to do the job of many. Therefore, you do not have to buy, maintain and service several servers.  Because there is one host machine, it allows you to efficiently manage all the virtual environments with a centralized tool – the hypervisor. The decision to use VMs is typically made by DevOps/Infrastructure Team.  Containers help reduce expenses as well and they are remarkably lightweight and fast to launch.  Because of their small size, you can quickly scale in and out of containers and add identical containers as needed.

Containers are excellent for Continuous Integration and Continuous Deployment (CI/CD) implementation. They foster collaborative development by distributing and merging images among developers.  Therefore, developers tend to favor Containers over VMs.  Most importantly, if the two teams work together (DevOps & Development) the decision on which technology to apply (VMs or Containers) can be made collaboratively with the best overall benefit to the product, client and company.

The operating systems and their applications share hardware resources from a single host server, or from a pool of host servers. Each VM requires its own underlying OS, and the hardware is virtualized. A hypervisor, or a virtual machine monitor, is software, firmware, or hardware that creates and runs VMs. It sits between the hardware and the virtual machine and is necessary to virtualize the server.

IT departments, both large and small, have embraced virtual machines to lower costs and increase efficiencies.  However, VMs can take up a lot of system resources because each VM needs a full copy of an operating system AND a virtual copy of all the hardware that the OS needs to run.  This quickly adds up to a lot of RAM and CPU cycles. And while this is still more economical than bare metal for some applications this is still overkill and thus, containers enter the scene.

Benefits of VMs
• Reduced hardware costs from server virtualization
• Multiple OS environments can exist simultaneously on the same machine, isolated from each other.
• Easy maintenance, application provisioning, availability and convenient recovery.
• Perhaps the greatest benefit of server virtualization is the capability to move a virtual machine from one server to another quickly and safely. Backing up critical data is done quickly and effectively because you can effortlessly create a replication site.
Popular VM Providers
• VMware vSphere ESXi, VMware has been active in the virtual space since 1998 and is an industry leader setting standards for reliability, performance, and support.
• Oracle VM VirtualBox - Not sure what operating systems you are likely to use? Then VirtualBox is a good choice because it supports an amazingly wide selection of host and client combinations. VirtualBox is powerful, comes with terrific features and, best of all, it’s free.
• Xen - Xen is the open source hypervisor included in the Linux kernel and, as such, it is available in all Linux distributions. The Xen Project is one of the many open source projects managed by the Linux Foundation.
• Hyper-V - is Microsoft’s virtualization platform, or ‘hypervisor’, which enables administrators to make better use of their hardware by virtualizing multiple operating systems to run off the same physical server simultaneously.
• KVM - Kernel-based Virtual Machine (KVM) is an open source virtualization technology built into Linux. Specifically, KVM lets you turn Linux into a hypervisor that allows a host machine to run multiple, isolated virtual environments called guests or virtual machines (VMs).

Containers are a way to wrap up an application into its own isolated ”box”. For the application in its container, it has no knowledge of any other applications or processes that exist outside of its box. Everything the application depends on to run successfully also lives inside this container. Wherever the box may move, the application will always be satisfied because it is bundled up with everything it needs to run.

Containers virtualize the OS instead of virtualizing the underlying computer like a virtual machine.  They sit on top of a physical server and its host OS — typically Linux or Windows. Each container shares the host OS kernel and, usually, the binaries and libraries, too. Shared components are read-only. Sharing OS resources such as libraries significantly reduces the need to reproduce the operating system code and means that a server can run multiple workloads with a single operating system installation. Containers are thus exceptionally light — they are only megabytes in size and take just seconds to start. Compared to containers, VMs take minutes to run and are an order of magnitude larger than an equivalent container.

In contrast to VMs, all that a container requires is enough of an operating system, supporting programs and libraries, and system resources to run a specific program. This means you can put two to three times as many applications on a single server with containers than you can with VMs. In addition, with containers, you can create a portable, consistent operating environment for development, testing, and deployment. This is a huge benefit to keep the environments consistent.

One of the biggest advantages to a container is the fact you can set aside less resources per container than you might per virtual machine. Keep in mind, containers are essentially for a single application while virtual machines need resources to run an entire operating system. For example, if you need to run multiple instances of MySQL, NGINX, or other services, using containers makes a lot of sense. If, however you need a full web server (LAMP) stack running on its own server, there is a lot to be said for running a virtual machine. A virtual machine gives you greater flexibility to choose your operating system and upgrading it as you see fit. A container by contrast, means that the container running the configured application is isolated in terms of OS upgrades from the host.

1. Docker - Nearly synonymous with containerization, Docker is the name of both the world’s leading containerization platform and the company that is the primary sponsor of the Docker open source project.
2. Kubernetes - Google’s most significant contribution to the containerization trend is the open source containerization orchestration platform it created.
3. Although much of early work on containers was done on the Linux platform, Microsoft has fully embraced both Docker and Kubernetes containerization in general.  Azure offers two container orchestrators Azure Kubernetes Service (AKS) and Azure Service Fabric.  Service Fabric represents the next-generation platform for building and managing these enterprise-class, tier-1, applications running in containers.
4. Of course, Microsoft and Google aren’t the only vendors offering a cloud-based container service. Amazon Web Services (AWS) has its own EC2 Container Service (ECS).
5. Like the other major public cloud vendors, IBM Bluemix also offers a Docker-based container service.
6. One of the early proponents of container technology, Red Hat claims to be “the second largest contributor to the Docker and Kubernetes codebases,” and it is also part of the Open Container Initiative and the Cloud Native Computing Foundation. Its flagship container product is its OpenShift platform as a service (PaaS), which is based on Docker and Kubernetes.

Uses for VMs vs Uses for Containers

Both containers and VMs have benefits and drawbacks, and the ultimate decision will depend on your specific needs, but there are some general rules of thumb.
• VMs are a better choice for running applications that require all of the operating system’s resources and functionality when you need to run multiple applications on servers or have a wide variety of operating systems to manage.
• Containers are a better choice when your biggest priority is maximizing the number of applications running on a minimal number of servers.

Because of their small size and application orientation, containers are well suited for agile delivery environments and microservice-based architectures. When you use containers and microservices, however, you can easily have hundreds or thousands of components in your environment. You may be able to manually manage a few dozen virtual machines or physical servers, but there is no way you can manage a production-scale container environment without automation. The task of automating and managing a large number of containers and how they interact is known as orchestration.

Scalability of containerized workloads is a completely different process from VM workloads. Modern containers include only the basic services their functions require, but one of them can be a web server, such as NGINX, which also acts as a load balancer. An orchestration system, such as Google Kubernetes is capable of determining, based upon traffic patterns, when the quantity of containers needs to scale out; can replicate container images automatically; and can then remove them from the system.
For most, the ideal setup is likely to include both. With the current state of virtualization technology, the flexibility of VMs and the minimal resource requirements of containers work together to provide environments with maximum functionality.

If your organization is running many instances of the same operating system, then you should look into whether containers are a good fit. They just might save you significant time and money over VMs.

Next: Sidecar Pattern:  The Dos and Don’ts of the Sidecar (or Sidekick) Pattern